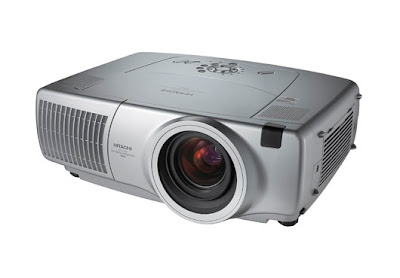 The work represented on this website is a result of a Faculty Research Award granted by the University of Texas at San Antonio in 2005. The proposed area of research was "Site-Specificity and Video Projection," and the award was used to procure two 4500-lumen video projectors and a gasoline-powered generator. 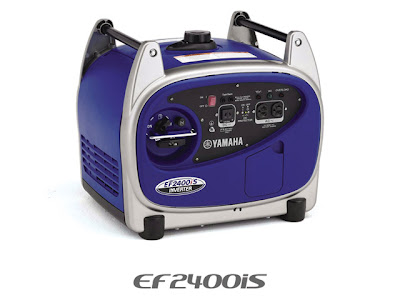 From the report: "This investigation of site specificity through video projection is an extension of my research and production of artwork involving the moving image. The project combines projected video images with outdoor sites, both manmade and natural.

Aesthetic and physical features, proximity to a public, and potential for conceptual development are examples of considerations for choosing a site. Video imagery may then be gathered from the physical location, digitally processed, and reintroduced to the site via large-scale video projection."

Projection-Performance at Sala Diaz Is Open 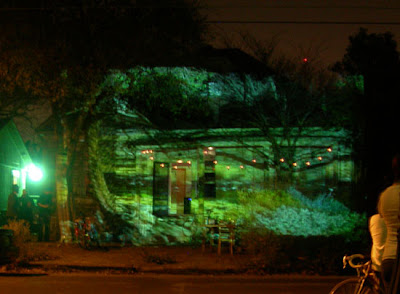 link to more information
Posted by elray at 8:04 AM No comments:

The Ms. Southtown Pagent requested a video projection to help draw the public to the unassuming site of their celebration in our quiet part of town.
I set up both 4500 lumen projectors in our space across the street, and projected side-by-side animations I made from images captured and manipulated, sourced from books of Indian art. I mixed two channels of video for this project-- a series of still photos of top-notch graffiti found inside the building, and an animation of fiesta candy captured frame-by-frame on the scanner. The colorful pulsating imagery alluded, again, to the history of the place both as a literal candy factory as well as its more recent use in its vacant state as a repository of eye-candy.

The San Antonio ice storm delayed this project enough to make it fortuitously coincide with the screening of Bill Daniel's "Who Is Bozo Texino," at the 1906 complex. Here's a shot of Bill & I meeting, with Anjali Gupta present. For more shots taken by Justin Parr: check out: Future Worker Girl works over the ghosts of Judson Candy Company A time-lapse video was made at 537 Roosevelt Avenue of two men removing graffiti from the wall in July 2007. The demonstration began by projecting this video onto the specific site where the activity had taken place. Other images, such as foliage and water, were then blended with the original image. Because the top portion of the projection was lost, I decided to aim the projector at the southern section of the building.

In this way, the projection was much more integrated into the site. The original plan to project documented activity from the location back onto the location was an interesting idea to explore, however, it felt limited in its potential to transcend the elements of time and space as I had been anticipating.

From that point, I tried many different images from my library of video loops. The one that worked the best was an animation I had made from a book of Indian mandala art. The color and movement created a visual affect that was able to transform the specifics of the time and especially the space of the site. Krysztof Wodizco is an artist who uses recognizable figurative images in his site-specific projections to set up concrete allegorical relationships with the physical architecture and meaning of the site. What I have done with this particular projection can, on one hand, be seen in counterpoint to Wodizco's method. The non-representational imagery changes the surface of the building into a 20' tall moving abstract mural. The aesthetic experience of light, color, shape, rhythm, and movement could be enjoyed for its formal qualities alone.

On the other hand, it can actually be seen from a symbolic vantage point of positive, dynamic energy emerging in the south-Southtown neighborhood of San Antonio, which is slowly going through a process of regeneration. The action of the painters reclaiming the 537 Roosevelt building from signs of neglect (graffiti) is conceptually mirrored in my action of broadcasting light and color, bringing life and energy to the site.
Posted by elray at 11:17 AM No comments:

Projection on the train as it crosses South Flores Avenue outside the Gallista Gallery and the 1906 Gallery Complex during the Second Saturday Gallery Walk. Once it became dark, I wheeled out my cart of projectors hooked to the gasoline generator when the train came by. The imagery I'd prepared in the days leading up to the event was of some trains, shot right in the vicinity and digitally abstracted. 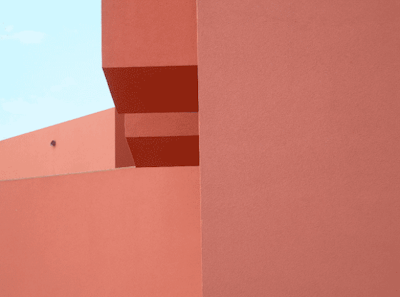 Channel 1 - library building
A series of digital still photographs of the library was created as a response to the Legoretta building's emphasis on geometric form. Digital alterations were then made to enhance the color and geometry of the compositions, and finally brought into a slideshow format. 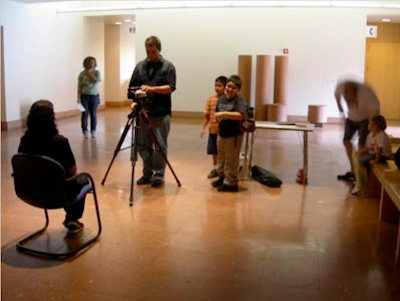 Channel 2 - portraits
On Saturday 22 October, over 70 library patrons sat to have their likenesses recorded on video at the San Antonio Central Library. The footage was then digitized and manipulated to heighten the drama of the portraits. I was assisted in this process by two of my students (Alyosha Dotson & Stevan Zivadinovic).
The two channels were combined when the projection was introduced to the site.